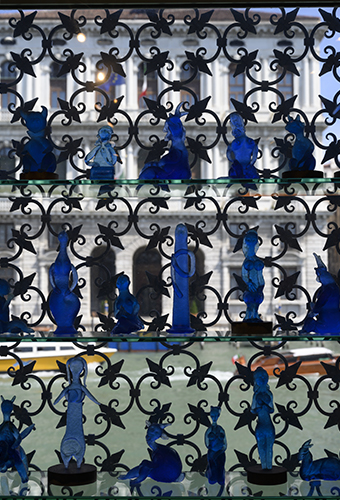 through a glass darkly

We’re at the Peggy Guggenheim. The collection is housed in the Palazzo Venier dei Leoni, an 18th-century palace on the Grand Canal, which was her for three decades. It is one of four Guggenheims; the other three are in New York City, Bilbao and Abu Dhabi.

The last time I was here, the Wertheimers went to the museum and I went to the cemetery on the Isola di San Michele; I went to find Stravinsky’s grave. I even collected a handful of small pebbles from the grave-site and still have them on my desk in a shallow bonsai pot.

I want to write that it was a simpler time and Venice wasn’t yet over-run with foreigners using its majesty as a backdrop for their selfies – ME on the Rialto bridge, ME in front of the Campanile, ME in San Marco square. But that certainly sounds hypocritical given that I took home rocks from Igor’s grave.

In the image on the right, the small poured-glass figurines, on shelves in the window, overlooking the Grand Canal, are sculptures from sketches by Picasso. The grand palazzo in the background was once home to Caterina Cornaro, the daughter of an ancient Venetian family.

The Marino Marini sculpture – L’angelo della città – The Angel of the City – in the entrance courtyard, is silk-screened on all the museum’s T-shirts and as much as I wanted to buy one, walking around Pittsburgh with an line-drawing of a man on a horse with a hardon just wouldn’t work.