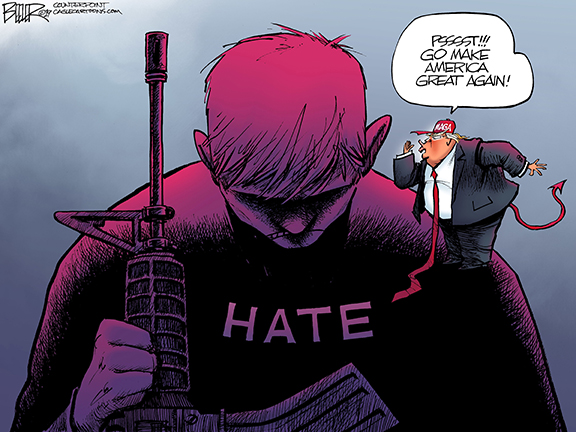 Why do Republicans enable right-wing extremism? 1

Why has the Republican Party become a systematic enabler of terrorism?

Don’t pretend to be shocked. Just look at G.O.P. responses to the massacre in El Paso. They have ranged from the ludicrous (blame video games!) to the almost honest (who would have expected Ted Cruz, of all people, to speak out against white supremacy?). But as far as I can tell, not one prominent Republican has even hinted at the obvious link between Donald Trump’s repeated incitements to violence and the upsurge in hate crimes.

So the party remains in lock step behind a man who has arguably done more to promote racial violence than any American since Nathan Bedford Forrest, who helped found the Ku Klux Klan, a terrorist organization if there ever was one — and who was recently honored by the Republican governor of Tennessee.

Anyway, the party’s complicity started long before Trump came on the scene. More than a decade ago, the Department of Homeland Security issued a report warning about a surge of right-wing extremism. The report was prescient, to say the least. But when congressional Republicans learned about it, they went on a rampage, demanding the resignation of Janet Napolitano, who headed the agency, and insisted that even using the term “right-wing extremism” was unacceptable.

This backlash was effective: Homeland Security drastically scaled back its efforts to monitor and head off what was already becoming a major threat. In effect, Republicans bullied law enforcement into creating a safe space for potential terrorists, as long as their violent impulses were motivated by the right kind of hatred.

But why did they do that? Is the G.O.P. now a party of white nationalists?

No, not exactly. No doubt some members of Congress, and a significant number of Trump administration officials, very much including the tweeter in chief, really are white supremacists. And a much larger fraction — almost surely bigger than anyone wants to admit — are racists. (Recently released tapes of conversations between Ronald Reagan and Richard Nixon reveal that the modern G.O.P.’s patron saint was, in fact, a crude racist who called Africans “monkeys.”)

But racism isn’t what drives the Republican establishment, and my guess is that a majority of the party’s elected officials find it a little bit repugnant — just not repugnant enough to induce them to repudiate its political exploitation. And their exploitation of racism has led them inexorably to where they are today: de facto enablers of a wave of white supremacist terrorism.

The central story of U.S. politics since the 1970s is the takeover of the Republican Party by economic radicals, determined to slash taxes for the wealthy while undermining the social safety net.

With the arguable exception of George H.W. Bush, every Republican president since 1980 has pushed through tax cuts that disproportionately benefited the 1 percent while trying to defund and/or privatize key social programs like Social Security, Medicare, Medicaid and the Affordable Care Act.

This agenda is, however, unpopular. Most voters believe that the rich should pay more, not less, in taxes, and want spending on social programs to rise, not fall.

So how do Republicans win elections? By appealing to racial animus. This is such an obvious fact of American political life that you have to be willfully blind not to see it.

For a long time, the G.O.P. establishment was able to keep this game under control. It would campaign using implicit appeals to racial hostility (welfare queens! Willie Horton!) but turn postelection to privatization and tax cuts.

But for some reason this bait-and-switch started getting less effective in the 2000s. Maybe it was the reality of America’s growing racial diversity; maybe it was the fact that American society as a whole was becoming less racist, leaving the hard-core racists feeling isolated and frustrated. And the election of our first black president really kicked hatred into overdrive.

The result is that there are more and more angry white people out there willing to commit mayhem — and able to do so because those same Republicans have blocked any effective control over sales of assault weapons.

A different, better G.O.P. might have been willing to acknowledge the growing threat and supported a crackdown on violent right-wing extremism, comparable to the F.B.I.’s successful campaign against the modern K.K.K. in the 1960s. A lot of innocent victims would be alive today if Republicans had done so.

But they didn’t, because admitting that right-wing extremism was a threat, or even a phrase law enforcement should be allowed to use, might have threatened the party’s exploitation of racial hostility to achieve its economic goals.

In effect, then, the Republican Party decided that a few massacres were an acceptable price to pay in return for tax cuts. I wish that were hyperbole, but the continuing refusal of G.O.P. figures to criticize Trump even after El Paso shows that it’s the literal truth.

So as I said at the beginning, the G.O.P. has become a systematic enabler of terrorism. Why? Follow the money.