Oliver and I went down to Narragansett. He was interested to see if it was somewhere he and Luz could spend a weekend. I was interested in seeing the Novitiate, the rocks and the beach. 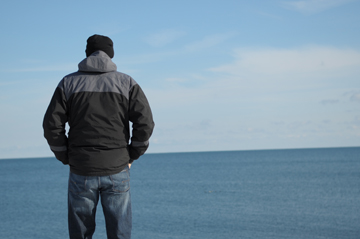 We began at the northern end, at the surfers’ beach, and then drove south on Ocean Road to the Novitiate. I got to tell about my life in the monastery and Oliver was amazed by the story. (I guess thirty-something Jewish Californians don’t know about Medieval European monasticism.) It was also fun being on the Novitiate grounds with someone who was neutral to the idea of my having lived there as a monk.

The next stop was Black Point. This is a small state park, an ocean-access area, across the road from the Novitiate. The strip of land is wooded and has a path down to what we called the rocks. This is an ocean-front of rock and shallow pools. We would walk down to the rocks at least once a week. I remember seeing star-fish in the shallow pools. I took one back to my room, thinking that it would dry and I’d have a souvenir. The smell of rotting flesh was enough to convince me to never try that experiment again.

In January of 1969 a group of novices rescued three fishermen that had run aground on the rocks. We formed a human chain and pulled the men out of the freezing ocean. We made all the local papers. The headline read – Brothers to All.

There is a famous picture of me in profile and with hair, sitting on the rocks and wistfully looking out to sea. It was my last summer at Narragansett. Bill Green took the picture without my knowing. (He gave it to me when we were leaving the Novitiate.) Bill’s photograph is soft, pretty and romantic.

I’ve always wanted to take a similar picture and I got the opportunity with Oliver as the subject. The above-left picture is my version of the 1969 photograph. Gone is the summer, gone is the longing, gone is the innocence.

Welcome to blue and black, welcome to geometry. 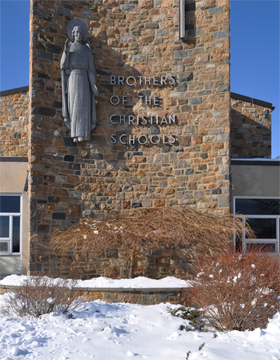 I’m working on a Novitiate text-page and it’s slow going, mainly because I’m not sure how to tell the story. The narrative of my time in the Novitiate is a bit complex. Which story do I tell – the John Veale one, the Benilde story, the house-driver story, the dorm-cloister story, the windmill-cottage story, the wrestling-in-the-grass story?

The Brother John Story – I had placed this grave-marker image at the end of the set, the last one on the text-page, but instead decided to start the series and the narrative with it. I wanted to lead with it as he was such a huge figure in that long-ago time. He was the Director of Novices and he still permeates the perimeter of my feelings about that long-ago. 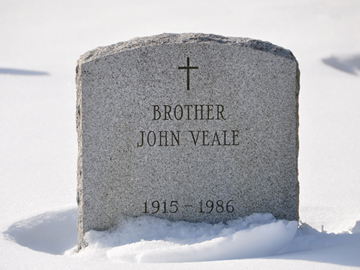 Each novice met with the Director once a week. It was my first experience with one-to-one counseling. I remember complaining to him, because the Brother Provincial would pull me out of afternoon Manual Labor to play tennis. (Manual Labor was one of the rhythms of novitiate life.) Can you imagine complaining about not doing manual labor? And my Manual Labor assignment was cleaning the common rooms on the ground level. I hate cleaning. I refuse to do it now, but back then I complained about not getting to do it. Actually, I did not like being excused from the Manual Labor assignment when everyone else still had to do it. (Even back then I had socialist tendencies.)

I’ve got the text-page done, but am procrastinating on the captions. The story-telling happens in the captions. Now, I can make the captions as cryptic as I want after all I am the author and who’s going to challenge their authenticity?

The photograph is of the southern corner of the Novitiate property – Ocean Road and Rhode Island Avenue. (The chapel is in the background.) This is the corner we always used to exit the grounds and go down to the beach or go walking through town. We would change out of our religious habits and into street clothes and head out across the front lawn. In the dark we were smudges on the manicured grass. We would climb the stone wall, both literally and metaphorically and walk out of the enclosure. 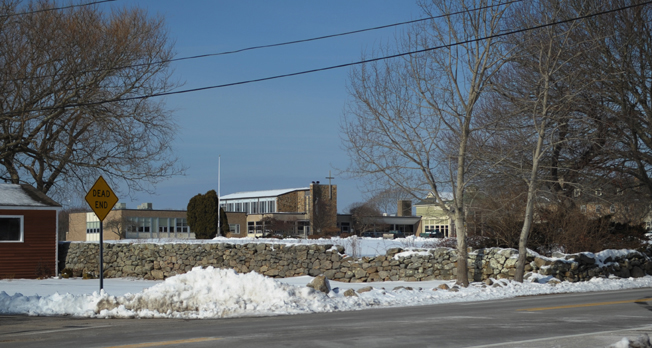 Thirty years later the top stones, at this southern end, are still missing. The breach is still there. (The cap stones lie piled on the lawn-side and serve as steps and ramp to the top, to the gap.) The corner is obviously still an exit-point.

Let me talk about the ‘Dead End’ sign. I intentionally included it in the photograph when I first saw it through the view finder. Second, I refused to Photoshop it out even if it’s going to be seen as a blight on the winter landscape. And third, I’m using a larger image-format so as not to lose the sign.

Is the yellow diamond, like the wall, both literal and metaphorical? Was the thought process that brought it into the photograph a subconscious statement?