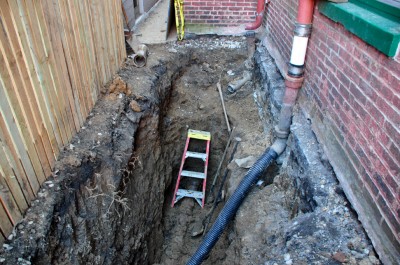 Had to have the sewer pipes dug up, because water from the shower was finding its way into the basement.

The image, right to left – the green kitchen window sill, the outside kitchen wall, the outside-stack that drains the toilet, bathtub and sink, the downspout, the alley and the fence. (Click the small thumbnail to see the large image.) The break that brought water into the basement was at the base of the outside-stack. (Very lucky to have the break this close to the surface.) The reason we were only seeing water is that the break was a crack in the terra-cotta pipe and as such didn’t let waste products through. The water created a sink-hole that brought the water down, and through the basement walls. The sink-hole is where the stack is connected to the blue plastic pipe.

The job is to reconnect the downspouts to the storm-drains and the stack to the sewer line; then fill the hole back up and wait for it to settle before cementing the area. 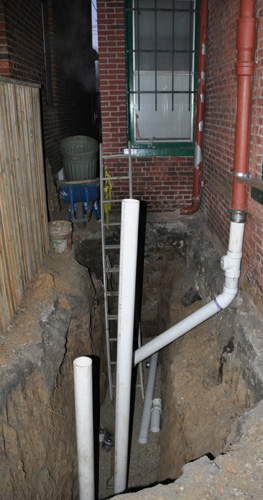 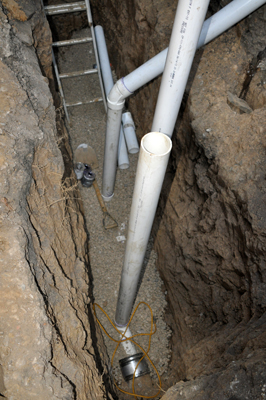 Day seven has been an inside-work day. The temperatures stayed below zero. The only bright spot was the lack of howling wind to dip them even lower. And the plumbers went to another job site that had them working indoors. I’m hoping that by the end of the week, they will have all the PVC connected, the hole filled, and the debris hauled.

The image shows the hole with the three pipes. The pipe with the elbow is the connector from the outside-stack and into the sewer. (The black lines, on the top right and below this pipe are frozen water. This is the sink-hole that the leak had created. And the sink-hole was steering the water from the bathtub and sink into the basement.) One of the vertical pipes is a vent and the other is the connector for the downspout carrying the rain water. (The PVC lying on the ground will be used to connect the downspout to the system.)

In the bottom of the image is the connector-ring into the existing terra-cotta sewer line. (They used the yellow extension cord to hook up a heater. I don’t how they worked yesterday in the bitter, bitter cold.)

I’ll have to revisit these big-dig posts and rename them. (However, I do like the alliteration and the fact that the ultimate Big Dig was in Boston.)

The weather has messed up the schedule wildly. Something that should have taken a week has gone on for three, because the ground is frozen and the outside temps are super freezing. 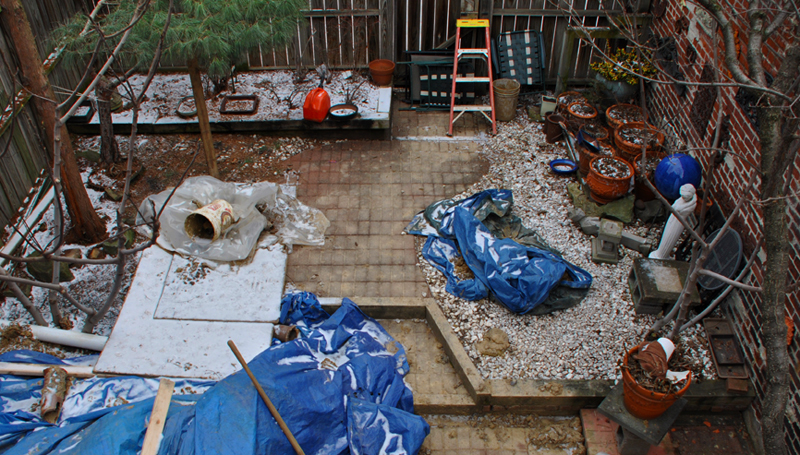 Now the question is, will my back-yard be cleaned up for spring? I keep telling myself, that come spring, there will be no evidence of the digging and mess that is the back-yard now. That has become my mantra each time I look out back. The only convenience of the freeze and snow is that the mud covering everything is frozen (The brown swirls on the bricks is, in warmer weather, mud.) and I can let the dogs out into the back-yard. For three days this week, when the temps were in the 60’s, the dogs had to go for walks. Hate that routine. 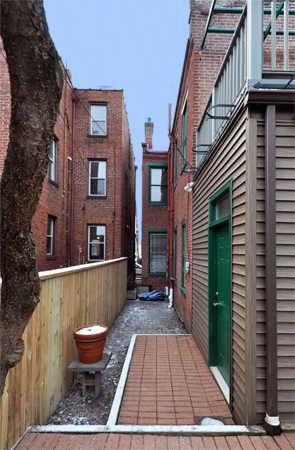 The warm weather this week allowed the plumbers to finish the stack-and-sewer work, fill in the hole with gravel, remove all the muck and clay they had dug up and wash everything down. The back-yard and the side-yard look great. (Mr. Merante came today to trim and cap all the above-ground pipes. Yesterday there was still this tall, white plastic pipe in the middle of the grey gravel.)It’s hard to believe that last week there was still a 12-by-15 feet hole on the side of my house. A hole that went easily 10 feet down to the sewer pipes.

The next project will come in the spring when the contractor can cover the gravel with cement. In the meantime, he will expand the landing, outside the door, over to the new fence. BTW, the flower pot is a place-holder, breaking up the monotony that is the grey gravel. (The narrow area beside the landing was not dug up, so there is no need to wait and see how it will settle. I am curious to see the settlement on the newly filled hole. ) 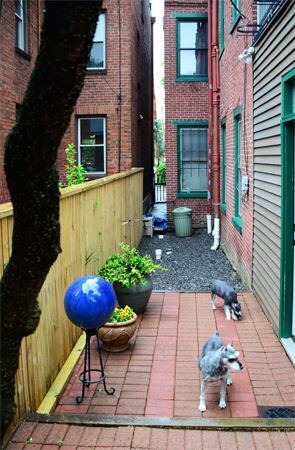 We are finally done with winter, the digging, the dirt-mound, the mud and the wet basement. It’s even been long enough for the fill to settle and the nest step is to cement the area with the dark-gray slag.

The first step in getting the side-yard renovated was to widen the platform in front of the back-door. (In the post – the big dig5 – the trough, that had been the far-end of the flower bed, was still there.) The new platform goes all the way to the new fence. The bricks now have a subtle pattern, the big-blue marble and the two flower pots decorate the pad. And two severely shaved dogs, that as recently as last week looked like matted sheep-dogs, round out the image of the next phase in the renovation. (Bilby is in the foreground, Gurl is in the back.)

Once the cement is poured, I will put four large pots with shade-loving plants on the new surface. (I’ve decided to go with the composite pots rather than the Italian terracotta, because I intent to leave them outside all year. The terracotta pots deteriorate when left out all winter.) I’m going to fill one pot with flag – iris. (There are huge cement pots in front of the boiler plant on Federal Street filled with flags and the iris seem to do well. So, I’m going to try the same thing in the side-yard.) 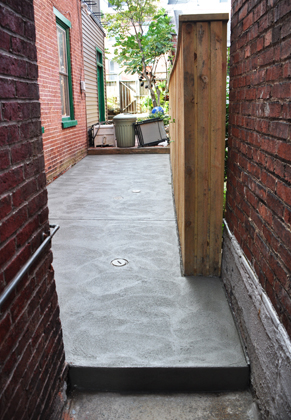 The concrete has been poured and the project that was begun last fall is almost complete. The last piece is the gate that belongs at the end of the slab, below the step. The wet summer was the problem. Could not coordinate a cement delivery with a rain-free date. They poured 4 inches of concrete covering the vents and the gravel. (It’s hard to believe that I have a paved side-yard and that now I can figure out what I want the whole to look like.)

My original design was for a cement wall and a cement flower-bed. The price for all that concrete would have been exorbitant and it would have not fit anything that is back there. It also would have changed the draining pattern of the area and would have required a whole new set of drainage pipes to be laid. The wooden fence and the small concrete area work so much better with the overall back-yard layout. (I lost the side-yard flower-bed, but it was always a difficult location for plants. The only things I miss are my snowdrops, but I now have a new location and ordered some 30 bulbs to seed.)

The hose-box, the garbage can and the collapsed lawn-chair are the barriers preventing the dogs from walking on the uncured cement.