italy does not have interner everywhere 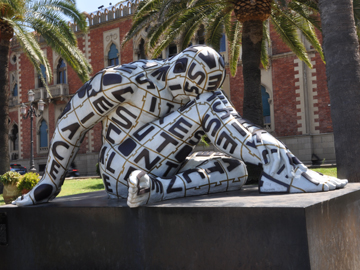 I am in Reggio di Calabria, one of my favorite cities. (I have to write and not use any contractions, because I do not know where the apostrophe is on the keyboard. Getting the @ symbol was a discovery. Derrick knew where it was because he did a presentation in Germany a couple years back and someone showed his where it was.)

The five days in Aprigliano were great. I must have taken close to 500 pics. I also kept notes and will post them as soon as I get a chance.

Today’s agenda includes eating gelato. (The young woman showed me where the apostrophe is.)

The villa where we’re staying in Pellaro, a suburb of Reggio is a beautiful home. All the amenities aren’t there, but the owner has brought in people to repair and install. Hopefully by tonight all will be in working order.

My cousin’s luggage was not on the plane when they came in yesterday. We tried making phone calls, but in Italy phone calls are like shouts across the alley. So this morning I suggested we go to the airport and see if the luggage was there. Face to face works best.

The driving – it’s still true, in Italy traffic rules are suggestions. I was on a two lane road yesterday, but there were four cars across and motorcycles on either side. I am more confident in driving down here, because there are other people in the car that can look out for sign. In Aprigliano, first there was the sheer cliffs and there you are in the mountains and cannot see around the next bend. Here on the ocean, the land is flat and the roads are flat. There are no flat surfaces in Aprigliano.

Last night we had supper on the terrace overlooking the Straights of Messina and Sicily. An amazing view. I look to the left and there’s Etna with smoke coming out of it’s top. On the Calabria side, the foothills of the Aspromonte are all brown, there is no vegetation on the hills. In contrast, Aprigliano in the northern part of the Aspromonte mountain range is all green. Sicily is all brown. I’m beginning to think that Sicily may be an interesting place.