reggio – my favorite place in calabria 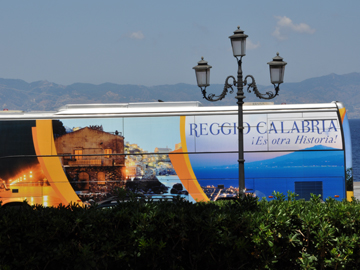 Reggio di Calabria the southern most city on the mainland is my favorite place. It is truly a beautiful city; a city full of art and the most spectacular lungomare in all of Italy. I discovered Reggio back in 2006 and one of the reasons I was willing to go back south this summer was because of Reggio. Between the beach, the lungomare and the two main streets that border the area you have one of the most magnificent piece of WOW. And to top it all off Cesare’s is in Reggio. Cesare’s is a kiosk where you can get one of the best gelatos in the world.

Two streets up from the lungomare is the main shopping area – a no traffic street with some of the best shops. Reggio is Calabria at its best.

The cathedral boasts a rock that St. Paul supposedly touched. The palazzi fronting the lungomare create a magnificent backdrop to the palm trees and the green strip bordering the sea walk. And look in the opposite direction and you see Messina and the mountains of Sicily. I don’t know of any other Italian city that has both the man-made beauty and the natural wonders of Reggio.

We walked a deserted city, because we were there late morning, early afternoon. I stayed in the shadows and even then I got sun. Reggion is 7 degrees north latitude of the Sahara. Imagine how hot it was.