For the mid-day meal I went back to Maria Lucente’s. We had the meal we were supposed to have on Friday. The meal was traditional and great. For dessert we had the standby cetrioli– garden cucumbers. After eating, I went into the room that had been Ciccio and Mafalda’s first apartment. 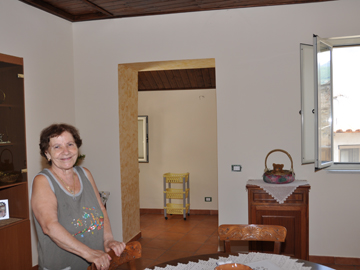 It was also the room where I was born. Maria bought the one-room building after her husband died and renovated it into a very beautiful dining room. I took many pictures. Through the doorway behind Maria Lucente is a small room with a fireplace. Mafalda told me the three of us would huddle around the fire in the winter. (There’s an image – Mafalda and Ciccio two young, beautiful people with a baby huddling together in front of a roaring fire.) The layout was still as it had been 60 years ago. Mafalda even told me where in the room I was when I fell off the table and cut my head on a axe. (There’s a different image.)

After lunch Maria and I went to visit another Capisciolto relative – Armelia. Armelia’s husband had died in late July and she was still mourning. When I got back to Mario and Tonina’s they told me about Armelia. She and her husband came back to Aprigliano after having spent 20 years or so in Toronto. Armelia is a true Capisciolto, meaning a good business person, and she was able to operate a home-business when she and her husband returned. Mario and Tonina also told me the Armelia lives in a huge house with 4 bathrooms. I’ve only been in a small kitchen, so this was a surprise.
..