Supper, a light meal, was going to be at 9:00 and afterwords we were going to La Grupa, another section of Aprigliano, for a concert. Mario also told me that if we wanted he was willing to take me up to the Rota, a small farming area half-hour north of Aprigliano, to visit with my cousin Aurelio.

We drove to La Rota around 7:30. Aurelio had just finished milking. Aurelio is a Capisciolto – the business side of my father’s family, and his mother’s side of the family. Aurelio’s father and my Capisciolti grandmother were brother and sister. The Capisciolti own land and ran businesses in Aprigliano. 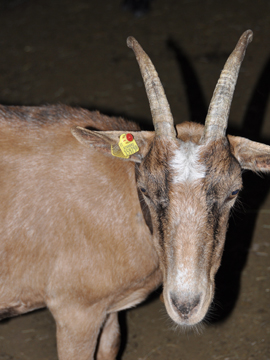 Aurelio owns a large track of land where he grazes a herd of sheet, makes cheese and ricotta that he sells in the area. Aurelio is probably in his 70’s. He knew I looked familiar, but couldn’t place me. (The last time I saw him we were both young. I was a junior in college and he was living at La Rota, but both his parents were still alive and his brother was still living at home. They were all involved in the cheese production business.) I took my ball cap off and he immediately recognized me. I look like my dad and he made the connection.

Aurelio is this strapping man who still works a 12-hour day tending a herd of sheep and producing milk, cheese and ricotta. This is his career and he makes a good living. La Rota however is off the road leading to La Sila, the huge national park that covers the entire middle of Calabria and is forest covered mountains, and therefore remote. If I had stayed the two weeks in Aprigliano, I would have gone back to Aurelio’s and asked to spend the day with him out on the slopes with the sheep. Aurelio is famous in town for two things – he has never married and his herd is registered with the livestock commission making his milk, cheese and ricotta agency approved and acceptable for sale nationally. Aurelio kept inviting us to stay and eat, but I was a bit worried about driving the off-road after dark so we left.

Back at Mario’s we had the evening meal. This was a light meal made of left-overs, one recently cooked dish and a salad. Cheese was on the table for both meals and dessert was fruit. Afterwards we all got changed into less casual, house-clothes and drove to Guarno. We were going on a passegiata. We walked from Guarno to La Grupa. Along the way everyone we chatted with the other Apriglianese out for the evening walk. We ended up in a small piazza in La Grupa. The entertainment was a band singing American songs.