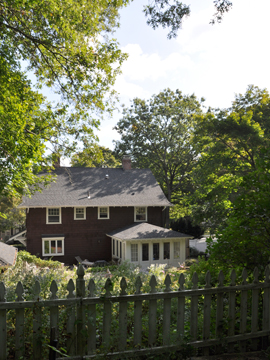 I arrived at Logan and Mac picked me up. He drove to Reading and I got to visited with Bev. They have this great house and I had a chance to shoot it. The pic here is probably one that neither of them would have thought of, but finding the picket fence at the top of their back yard, a picket that is strictly ornamental, gave me a great vantage point. I don’t know if they think of their house as having this look.

It was fun shooting this old New England house. I think of it as standing alone in a field, so I tried to shoot it in a way that isolated it from its neighbors and placed it in the background. The picket fence fools the viewer into thinking that there’s nothing else around, that the house is far in the distance. Oh yes, this is the back of the house and because the yard is on a slope it was easier to capture a far-away look. 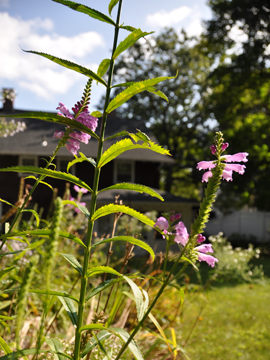 I also discovered a fall flower-garden, in front of the picket, that allowed me to shoot the house out of focus and in the background. For me, the flowers were farmish and added to the isolation and far-away look. To get this shot I lay on the ground as close to the flower as I could get and still keep it in focus. (I always worry that someone will see me on the ground and wonder what the hell I’m doing. If I had had more time and if I was thinking, I should have changed to the wide-angle lens and shot the flowers very close.)

The inside of John and Bev’s house is beautiful, but it was all mixed up, because they’ve been renovating and I didn’t feel right shooting it in its present state, even though I really wanted to. I love what homes looks like when we’re in the middle of change; the rocking chair we cover; the pictures we lean on furniture; the small, blue vase we keep with fresh flowers even if it is surrounded by plaster-dust.