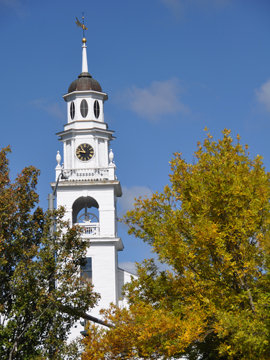 On Friday morning we headed out of Ogunquit going north, through the back roads, towards Kennebunk. We stopped for breakfast at this famous Maine diner and on the menu were baked beans. Baked beans for breakfast, I had to have them and they were good.

Kennebunk has this great church in the center of town. It was the biggest of the Maine churches and steeples that I had shot. And like all the other churches it too was surrounded by a graveyard. The steeple, above the main tower-base, had five sections to it. The first of the five sections had a large bell-wheel in it. The next sections had a clock – four clocks, one at each cardinal point. A weather vane on a pole topped the steeple no cross marker for these New Englanders.

So why are all these churches painted white? Here’s the answer – White paint was associated with the color of stable, enduring classical buildings; white spoke the language of virtue and simplicity. White proclaimed prosperity and class consciousness. White paint was more expensive to produce than colored paint; it was recognized as the tint of wealth. (Imagining New England, by Joseph Conforti)

Kennebunk seems to be a year-round community. I mention this, because so much of south eastern Maine had a seasonal quality to it. It was hard to imagine these beautiful wooden homes being used year-round, especially given the winter and the proximity of the sea. However, Kennebunk had many, many brick homes. As a matter of fact it had the look of a rich suburban community with cul-de-sacs and housing plans.
..