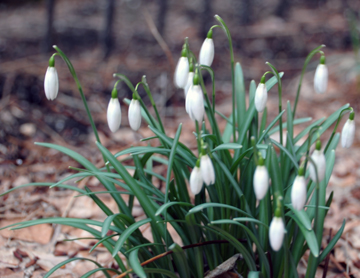 If I had remembered the death-march that is this third month, I would have suggested to Tom that we go to New Orleans in March. But I guess the mind forgets our misery and pain otherwise mothers would never have a second child.

Today was the switch to daylight-savings-time and I went out and shot the snowdrops at 7:00 PM. (My grandmother used to tell us that the actions we performed on New Year would repeat throughout the coming months. I want the old saying to apply now when I’m immobile with winter. I want the wish and action of shooting in early evening to repeat over the next many months.)

The snowdrops have been coming up in the side-bed for the last 20 years. And they are a welcome in the over-cast days that fill the month. There are many things that I like about Pittsburgh, but the fact that we have only 59 sunny days a year is not one. Outside March was dreary and winter-gray.

In Italian snowdrops are le bucaneve literally, make-a-hole-through-the-snow. And there have been many years when the flower-bed was covered in white and they poked through the March snows. This year they lifted through the litter of rotting leaves and twisted twigs. Not the spectacular contract of green on winter-white, but still welcomed. I’ve tried to fill the bed with snowdrop bulbs, but the same cluster comes up year-after-year.

in the house of the rising sun