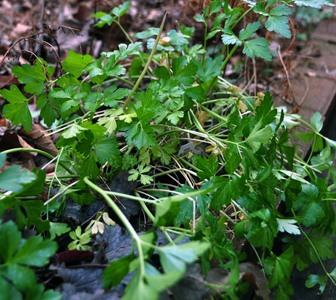 A winter that had been truant for a month made a striking comeback.

But the parsley seems immune to winter’s frigid breath. Yes, it sprawls lifeless on the bricks when the temperatures mingle with the teens, making me think that it has lost its battle and given up its green to winter’s white. But today, it ducked the January winds, raised its stems and invited me to pluck its green, flat leaves and add them to the potato salad.

I was thinking they would be void of flavor and serve only to color the Yukon Golds flat faces. I was wrong; the pungent taste survived winter’s freeze. The chopping released the oils; the green flecks spotted the golden wedges and reminded all the dinner guests that we had not lost the battle to the Arctic winds.

the winter is forbidden till december