The read this series in chronological order,
click on the category title – Kaua’i-12. 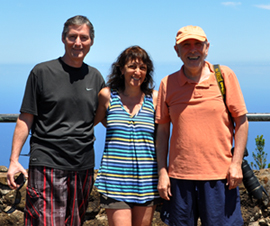 Waimea Canyon, last year shrouded in mist and rain I saw nothing of the gorge. This year, the weather held and there were the green depths, the vermilion sands, the blue skies, and purple waters.

(I rarely post pictures of people, let alone a pic that I’m in, but I thought I’d try it. Some nice tourist took the pic. I set up the shot and told her to keep snapping. She was surprised that I was willing to let her take multiple shots, and once over the surprise, she began to compose shots, change angels, even come in closer. This is the one I like best. I cropped the bottom portion, because I was wearing my bloomer swimming trunks and my legs look like match sticks when I have them on.)

The canyon, on the south-western side, was created by the collapse of the volcano that created Kauaʻi – the oldest island in the archipelago. This canyon, painted in Crayola colors, is part of the Waimea Canyon State Park, one of those government creations that we now seem to dismiss as we wallow in anger and hate in our political discourse.

There are several vantage points, the first is where all the tour buses stop, but we headed for the highest outlook. And there below us in verdant depths, its sides streaked with ochre fingerprints, lay the grand canyon.