One of the main reasons we flew into and out of Bologna was because we wanted to eat at Ristorante Alice. We had eaten here three/four years ago and really liked it, so we were determined to get back to it. (I kept reminding Rose that the restaurant may not be there. After all, our favorite enoteca was gone. We resigned ourselves to that loss and had a glass of Sangiovese at a tourist joint.) 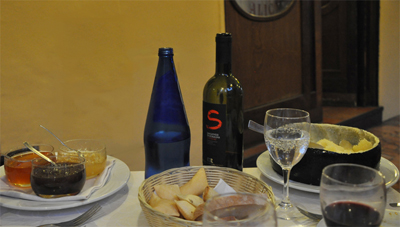 The things we remembered about ristorante alice were the antipasti, the wheel of cheese, and the pasta. Rose had kept the phone number, so I called and made reservations for 8:00. (Italians are just getting dressed to go out at 8:00, we were at the restaurant ready to eat. Whenever we go out to dinner, we are always the first to arrive.)

The restaurant is in the old city – via d’Azeglio – and its outside tables are under one of Bologna’s many porticos. The streets of the old city are lined with these beautiful and practical overhangs. Some are plain and some decorated with frescoes. However, all keep the sun off your head and the rain off your clothes. (In the area of town with Bulgari, Prada, Bottega Veneta, Armani, the porticoes are covered with frescoes.)

We began with the antipasti and the waiter brought out three – grilled zucchini, eggplant, and chick-peas in a balsamic reduction. We just kept smacking out lips and I complained about there being only three. Rose told me to just hold on and the rest would come out slowly. And they did. There was grilled zucchini, buffalo mozzarella, chickpeas in a balsamic reduction, grilled eggplant, roasted peppers, cabbage, dry sausage and prosciutto, roasted turkey with potato dumplings, Borlotti beans with tomatoes, and frittata topped with tomato sauce. We then decided to have a primi piatti, Derrick and I ordered the home-made fettuccini with porcini mushrooms. Rose ordered the ziti with a tomato sauce. She complained about the fact that once again she had missed out on getting the really good pasta. And she had. (The problem was that it was way too much food. I’m not used to eating three full meals a day. One thing about going home is that I will be able to get back to a more restrained eating regiment.)