I love being in the mountains. (Earle-and-Suzanne’s is urban compared to where we are this week.)
This morning I walked down the road and there were all the farms that dot the valley. Came back and started shooting the sunflowers – le girasole – on the property. And the bees … (It was really the dark, dark blue.) There are hives on all the farms we pass, and now I know where the bees end up. Also, found that the plants that look like corn are pig corn. It grows nothing like American, genetically modified corn. The pig corn grows a single cob, a plume at the top of the leaves, with no husk. Here corn has always been something farmers feed the animals. Humans do not eat corn-on-the-cobs in Italy. But, there’s a whole food culture in northern Italy based on polenta – a mush made from corn flour – as the staple. 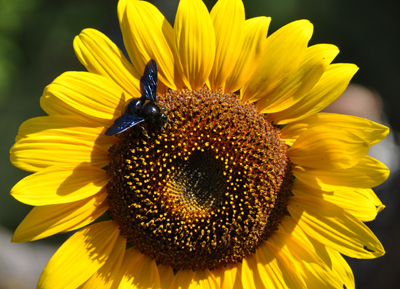 Today we decided to explore Sant’Angelo in Vado. We expected a back-water town and it turned out to be a great little town. We got there after Mass let out and it was teeming with locals.

To get there we literally went up and over the mountain. The road is this twisty, steep slope heading forever down. The name is Saint Angelo in the Valley. Guess we had to get down the mountain and into the valley. When we got there, we followed the town people into the Cathedral. (I didn’t take pics. There were too many of the faithful still milling around.

We found a store and bought dinner – roasted rabbit in wild fennel and garlic, stuffed zucchini, eggplant and peppers.

We left Sant’Angelo in Vado and did not want to go back up the mountain road, so we headed into Umbria and the provincial roads. We might as well have gone back up the mountain. We traded one mountain for another and headed down the next steep incline into another valley. (The speed limit is 70 km/h. I don’t know how they do it on the mountain roads. Even the bikes are racing the roads. BTW, everyone here wears helmets. There are signs everywhere reminding drives of the dangers of not wearing a helmet. Too bad Americans put machismo ahead of safety. But then they aren’t driving the mountain roads of Italy.)

the old can blog too

if loreto, then the reformation