Today is our last full-day at Earle-and-Suzanne’s. (Tomorrow we head over to La Tavola Marche.) We decided to have dinner at a restaurant, in San Lorenzo in Campo, that specializes in farro dishes. San Lorenzo is in the next valley to the south of us and to get there you literally go over the mountain and through the campi.

Because of our dinner reservations, we decided to explore close to the house and Urbania fit the bill. It’s claim to fame is a Befana festival in early January. It’s a small town on the cusp of renewal. 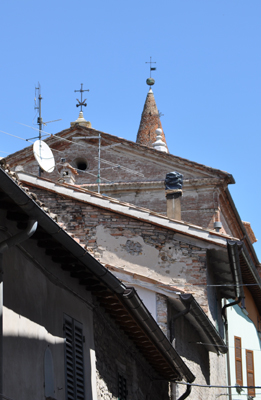 The town was quite lively and full of Italian tourists and foreign students. (There is an international school here and kids come from all over to the music academy.)

After our exploration we stopped at a gelateria and it had a Nutella flavored gelato. I had to have one. It was really not good – too much Nutella and not enough gelato.

The next eating adventure was at the Farroteca in San Lorenzo in Campo. The drive over, as I said, was over the mountain. (We go by one of my favorite hill-towns – Fratte Rosa – and I think I like that valley more than the one we are in.) We parked in the main piazza and walked the short distance to the restaurant.

The place is on a property with three structures – a villa, the itinerant farmers’ residence that is now modernized and the old animal shed that has been renovated into the restaurant. The owner – Lea – is this vivacious older woman who had us laughing throughout the entire meal. (She complained loudly about the Italian version of Socialism and was taken back when I told her that millions of Americans don’t have health care. Her answer was, “Questo non e gusto.” – That is just not fair.

Dinner was great. It was a fixed menu. We began with a farro salad. (The olive oil is from her property across the valley – Monterosso – and tasted amazing.) This was followed by cheese with prosciutto and small farro breads topped with olives and zucchini. The third course was a fresh, soft cheese on farro pita. The primo piatto was ricotta ravioli with porcini mushrooms. This was followed by sweets served with the local dessert wine – Visciolata – and espresso finished the meal. (We had a bottle of red wine from her vineyard and two liters of sparking water with our meal.) The entire dinner cost us 75 euros.