Today we drove to Pesaro and the northern coast. Where Senigallia is overrun with tourists and frantic, Pesaro is full of locals and slow. The streets in the old town are shadowed by trees, and the beaches are orderly if riddled with umbrellas. 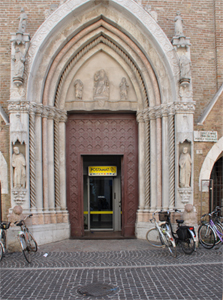 We got there early enough to walk the streets with the locals. Near the government center, an old church had been retrofitted into a post office, and I decided that would make a great shot, so I walked across the street to shoot the facade with the yellow postal sign inside the main entrance. A young man came up to me and began a harangue about the injustice of having retrofitted a church. He then asked if I was from Pesaro, I went into a full-American pretending I had not understood him and that I was a lowly tourist. He looked disgusted, but left. (So, was the disgust about the injustice of government taking over a church or that I was an American who only spoke one language – American English?)

BTW, most of the English you find here is British English – axioms, spellings, terminology. For example, at lunch the menu had an English translation. I wanted a salad, and I’m looking at the ingredients in English and one of the items was ‘rocket’. What the hell is rocket? There’s no such vegetable with that name. Rose told me that rocket is arugula. And that the British call it rocket. What!! (It may come from the other word for arugula – rucola. But how do you get rocket from rucola? Only a culinary challenged society could call an edible grass a rocket.) Another item for my list of Things-to-Hold-Against-the-British.

I probably need to re-examine my comments. The young man from Pesaro was ranting against the government take-over of church-owned buildings, I’m here ranting about the British. I guess all Italians have something to harangue about, even old ones who now live full-time in America.

all through the night