white and black figs – in pittsburgh

My two, white-fig trees are full of fruit that should ripen by the end of the month. White-fig is a literal translation of the Calabrese name for the plant. On the outside the fruit gets yellow-green, on the inside when ripe it’s yellow-white. The trees are from cuttings from my cousin’s land in Aprigliano. Sam was the Johnny Appleseed of his generation. (My grandfather and Sam’s mother were brother and sister.) He supplied fig-tree cuttings to any and all family members who were willing to try to grow them. In Coraopolis, Bryan has a cutting rooting in an old dry-wall mud pot. In Wilkinsburg, the Wertheimers have a black-fig tree that came from Sam’s stock. They’ve become honorary family members.

Back in the 70’s, on one of his trips to Aprigliano, Sam decided to bring back to St. Catherines, cuttings from the fig-trees that littered the hill-sides of the family farm. He smuggled back two small cuttings – a white-fig and a black-fig. And from these two cuttings he grew a grove of fig-trees in his garden, in southern Ontario. 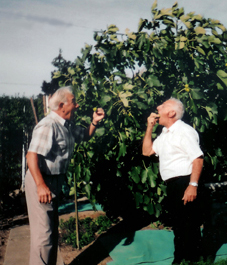 The white-figs with the yellow-white centers, ripen in early summer. The tree is not as bountiful as the black and therefore its green, round fruit is considered a delicacy, a rarity. The black-figs are really a maroon color with an elongated, oval shape. These trees produce ten times the number of figs and the dark brownish-red fruit ripens in early fall.

Every year in October, at Canadian Thanksgiving, we would all trek down from Toronto to St. Catherines to gorge on the transplants, the black beauties from Calabria. (The picture on the left is of Sam and my uncle Milio stuffing figs.) There were so many figs that we would eat and eat and eat and worry only about not eating enough.

These black beauties would be gone with the first frost and stories of Calabria and figs on the dinner table would be silent for another year. By Thanksgiving Monday, many of us would also be gone heading north, west and south into the pallid isolation of a coming winter.