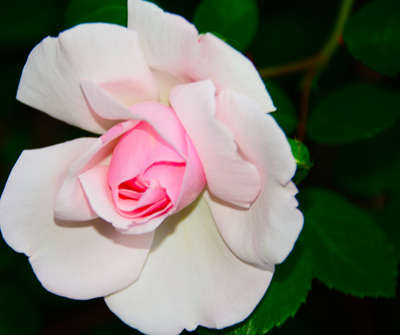 With the erratic weather systems controlling all our lives, the spring flowering cycle is totally off-kilter. And roses that should have been the harbingers of summer are now blooming in mid-May. Their role as precursors has been usurped. The only good part is that there are roses everywhere. Bushes that lay dormant for seasons are now full of flowers. The ever-blooming hybrids are heavy with buds; the heirloom stalks are dripping with petals; and the climbers have invaded the fences.

It’s been a while since I’ve had the time to shoot flowers. The micro lens is in its cloth bag and the tripods are collecting dust in the corner. But the 800e compensates, collecting 36.3 mp of data. I’m learning to shoot with the 800e, experimenting, getting comfortable with aperture priority. (I’ve even ventured into using the flash for effect rather than for need. It’s how I got the black background on the pic.) The image on the left was a surprise, but I still manipulated it. The pink middle was exaggerated with Photoshop, and the contrasting black and green were the results of the flash.