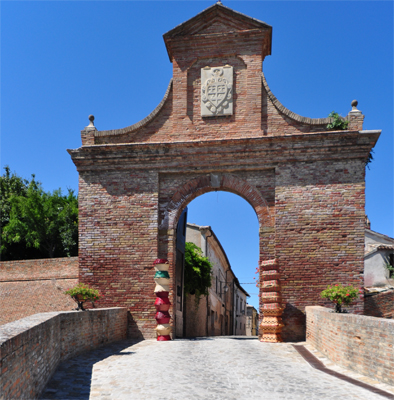 After our expensive market trip, we decided to have lunch on the veranda and then go driving along the north-west ridge of the valley. (The Metauro River is at the bottom of the valley. And Earle-and-Suzanne’s is on the south-east slope.)

We began at San Ippolito another of the Medieval borgo that spires off the ridge. From San Ippolito, using the telescopic lens, I was able to see back to our side of the ridge and make out the Finocchi farm. Next we drove down the provincial road and stopped at Sorbolongo a small borgo that is famous for its snail festival. The valley on the other side is rolling hills and plowed fields, just like our side. Each borgo is situated atop a promontory and looks out at the fields below. The next Medieval fortress was Barchi and the image on the right is the entrance to the old borgo. On either side of the gate are two columns of wicker baskets. Last night they had a festival and these are left from then. In the old town saw a house I would be willing to live in. The house was totally restored, overlooking the valley and the best feature was its walled-in garden. My idea of a house. The garden was like a courtyard well sealed from the world.

The last borgo on the tour was Orciano di Pesaro. It had a modern plaza that was part of the rope climbing museum.

On our way back I wanted to stop at a convent outside of Fratte Rosa, but the GPS is programmed to take us the shortest route and it always messes us up at Fratte Rosa. The white-road back to Earle-and-Suzanne’s was over the hills and through the woods, so we missed the convent.