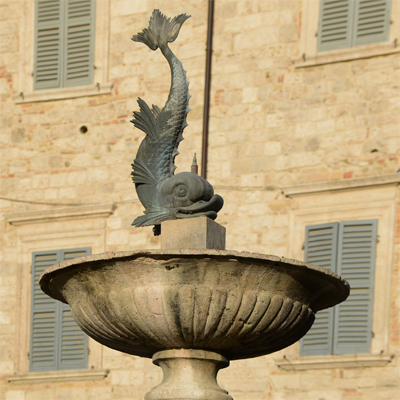 Ascoli Piceno has the same problem as Reggio di Calabria. Everyone refers to these two cities by the first part of the name.

American English generally puts the emphasis on the last syllable. This tends to slow the language down. Italian with its emphasis at the beginning or the word allows for a much faster speaking speed, because you don’t stop to emphasis the ending, rather you are speeding up and onto the next word.

The images is of the top of one of the two matching fountains in the Piazza del Duomo. (An inland city dreaming of sea-horses and fish?)