the house and the fields at sunset16th entry – le marche 2013 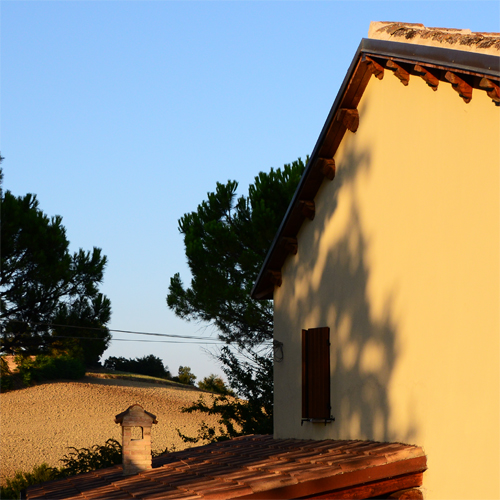 We ate under the pergola. Dinner was a tomato salad with lots of oily juice to mop up, and a Borlotti beans salad. We had lunch on the porch and supper on the upper terrace. Because the temperature had actually gone down we were able to sit and watch the sun set. The various shades of rust and brown are just comforting and they make the contrasting greens vibrant.

Each year I learn something new, this year I’m learning about fagioli Borlotti. (I have a built in prejudice against beans. In my family beans were associated with poor people and people who lived on farms, not people who lived the the medieval borghi that the Perri family called home in Aprigliano.) We’ve bought a kilo at the farmers’ market in Fossombrone and another at the market in Fano. Last night Rose flavored the beans with a soft sausage from Sarnano. The reason I like them is that they have a soft skin and no bean flavor.

I’m shooting from the upper terrace. The chimney and the clay roof-tiles are on the entrance to Earle-and-Suzanne’s, the second story shutters are on the bedroom Rose and Derrick use, and beyond is the clay hill-side of plowed earth.