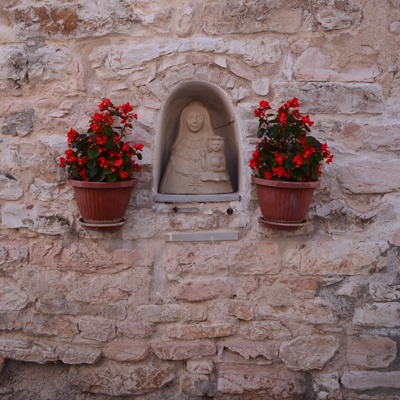 Everywhere you go in Italy there area idols. Holy Mother Church has legitimized all these by calling them saints, but they are statues of things people idolize and worship.

This morning we went to the restored little hill-town of Torricella di Fossombrone. (Last night the GPS took us all the way down to Pergola, 30 kilometers away, because down there is an official neighborhood called Torricella. When we asked the women, sitting around on the benches outside their homes, if this was the Torricella that had been all restored, they told us that we were looking for Torricella di Fossombrone. Rose had seen the blue sign on our way, close to Earle-and-Suzanne’s, but her suggestion was ignored in favor of the technology.) Sure enough the blue sign led us to the restored fourteen century hamlet.

The reason for the titles is because once again, while trying to do something related to a church, we ran into a mean old man. First the fool in San Ginesio who left the gate open and then yelled at us for going into the sanctuary, today’s mean old man told me that yes he had the key to the church of San Giorgio, but he didn’t give it out. What the hell were we going to do, steal their craven idols? He then condescendingly suggested that I take pictures of the outside of the hamlet. Being a good tourist is hard when you want to give someone the finger.

Meanwhile one of the women that was there with the mean old man was very helpful, telling us how the residents had all worked together to restore the houses. (It’s been a 30 year project.)