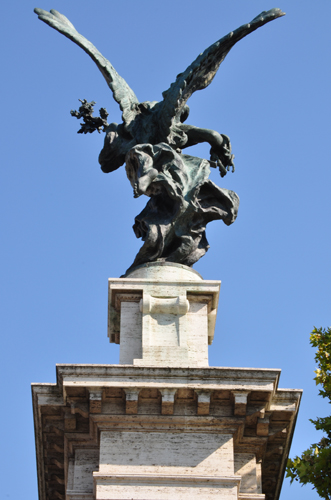 We got to Rome early and headed over towards the Vatican. We decided to walk Corso Vittorio Emanuele rather than along the Tiber as we did back in 2011. The Vittorio Emanuele bridge that leads into St. Peter’s Square has two columns topped with angels. The image on the right is one of the two angels.

Rome is so unlike any other Italian city. Its wide streets and boulevards were build during the Renaissance and reflect the grandeur of that fabled time. (I believe that what makes this obvious is the size of the city. Rome, Florence and Venice are the three jewels of Renaissance Italy, but Rome is the grandest.) Rome has none of the oppressiveness of the Medieval borgos. It’s airy, full of green spaces and giant sycamores line the banks of the Tiber. The river is no dried-up bed; it’s been dammed and therefore full of water.

We walked through Campo de’ Fiori – the old ghetto – hoping to find a wine bar or restaurant, but Rome is empty of Romans in August and full of foreigners. We ended up in a horrible restaurant where the wine was terrible. The only thing was that it was air conditioned.