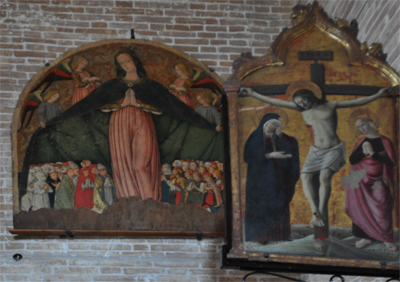 Sarnano is a small town in the foothills of the Sibillini the mystic mountains. (The dark-green fungal circles marking the grassy hillside are where the goat-footed witches come to dance at midnight. And from caves in the craggy mountains clairvoyant sibyls delivered prophecies in ancient times. Countless female-centred cults held sway in these mountains at one time or another, and one modern academic points out that, viewed from the air, seven ancient churches scattered across the Sibillini mountaintops replicate the arrangement of the stars in the constellation Venus. Witches, soothsayers, devils, goblins. How could there not be such things in such an otherworldly landscape?)

The medieval borgo with its narrow, steep streets culminates in a silent piazza at the top. There in a small church is a second Madonna della Misericordia by Pietro Alemanno. The central figure is very similar to the one in San Ginesio, but her robe covers fewer people. (It’s too bad that the painting is not displayed as well as the one in San Ginesio. In front of the painting is a smaller one of the crucifixion. Apparently this smaller piece is paraded through the old town on feat days.) In the crypt are two frescoes attributed to Alemanno. (On the pews were the weekly missals, the cover was Alemanno’s madonna cleaned up and minus the smaller crucifixion. Rose borrowed one to take back to Michigan.)

Sarnano had Wi-Fi signs all through the old borgo. It like Gubbio gives anyone in the old town access. I guess it’s the least they can do for anyone still willing to live in its steep, stone paved alleys.