I began Friday, August 2 by going into work. It was a half-day for everyone and there were items that I was in charge of at the morning meeting. Got home by noon, had a quick lunch and got ready to leave. (Dan and Ellen drove me to the airport.) And given that I like going early, I got to the gate two hours before departure. We boarded on time and then began the nightmare. First, the plane had hit a bird on its way from Detroit and that residue had to be cleaned; next we were over-weight and two airline employees had to get off; then we pull away from the gate only to wait on the tarmac for 45 minutes; by this time the couple behind me who had been on the phone to the airline trying to figure out if they were going to make their connection in Detroit, when it was obvious that they had missed the connection, decided that they would rather remain in Pittsburgh than overnight in Detroit; we went back to the gate to let them off. It was now 4:30, an hour delayed. The flying time was only 38 minutes, but we had to get in the air before that applied.

It was 4:55 before we were in the air. I got off in Detroit at 5:45, and began my sprint to terminal A. (Terminal A is the opposite end of the airport. The whole wait-time I had been in contact with Rose and the were just as anxious because we were going to have to deal with the consequences of my not making the Rome flight.) I literally ran the whole way and got to the gate by 6:00. The lounge was empty, and they had to special open the door into the jet-way. I got to my seat with 10 minutes to spare. (As a sat down the thought of my luggage kept floating through my head. Did it make it onto the plane? If it didn’t how was I going to retrieve it? Was I going to have to drive into Rome on Sunday?) The plane to Rome was this luxurious, huge thing so at least the flight was going to be comfortable.

We got to Rome, the line through customs wasn’t too annoying, my bag was at Baggage Claim, and because we got to the rent-a-car before the crowd, we got our Punta and were on our way by 10:00. 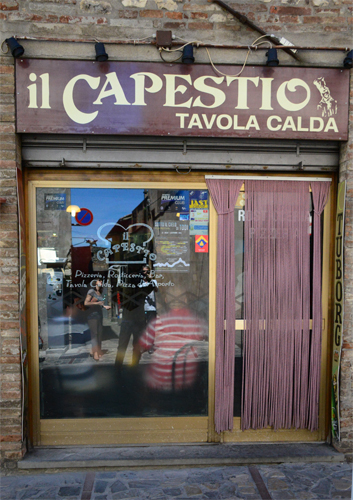 The original plans for this trip were to fly into Ancona, but those fell apart and we were back to driving from Rome to Earle-and-Suzanne’s. Driving out of Rome is like driving out of any modern metropolis. Driving time was three-and-a-half hours and we weren’t scheduled to have access to the house until 4:00. We kept debating how to stretch the time. We settled on stopping in Todi for lunch. We like Todi.

We got off the highway and made out way up the mountain to beautiful Todi. (The GPS is totally annoying as it keeps repeating – Recalculating, recalculating …) We actually go in to see the inside of the famous church outside the walls of the ancient city. (The last time we were here, the church was closed and a couple from the UK took our picture sitting on the wall outside the church.)

Parking is always a problem in the hill-towns, and we were practically outside the walls before we found a spot. As Rose and Derrick were negotiating the parking machine, the owner of the restaurant came out to tell us that on Saturday parking was free between 1 and 4. I looked at the place he came out of and decided that we needed to go in there with the locals and have lunch. It was a great first meal.