I’m beginning the christmas 2013 posts early, because I’m going to organize them differently. I’m linking these posts to the 8th grade category, because I want to wrap them around some memories of nineteen-sixty-three.

December 1963
We had moved to the west-end in June and this was my first Christmas at St. Veronica’s. I was curious to see how it would go, because for the first time I had a nun teacher. Was she going to deal with Advent differently than all the non-religious teachers I had had? 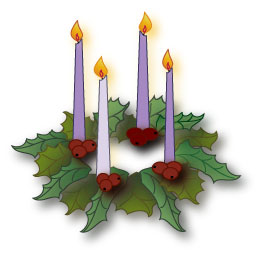 The Monday of the first week of Advent, Sister Drusilla lined us up in the hallway – the upper grades were in the old hallway and the younger kids were in the hallway leading to the new wing – and with the sign-of-the-cross she began the Advent service. The young nun who taught first grade picked up from Sister Drusilla reciting the Advent prayers and readings. It ended with us singing O Come, O Come Emmanuel. I liked the Advent service. We certainly didn’t do anything like this at St. Theresa’s.

The time before Christmas was full of anticipation and even though I knew all about Liturgical Advent, it never seemed real hearing about it only on Sunday at church. We did not have an Advent wreath at church, but having the service at school with the wreath on a small table in the hallway with candles that Sister let a kid light, made the season of Advent real.

(For the image, I wanted something that was both modern and non-realistic.)