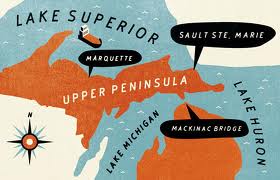 I think if the drive home in 8 pieces – the UP, the Mackinac Bridge, the Isolation, Gaylord, Grayling, West Branch, Saginaw, the Old Road, Frankenmuth and Birch Run, I-475 through Flint, I-69 East and Michigan 24 to Oxford.

1. The UP
Traffic on the International Bridge was heavy and it took me 45 minutes to get through customs. I-75 through the Upper Peninsula is a road in the middle of nowhere. That stretch of the interstate is very pretty and with all the snow a winter wonderland. It’s the beginning of the trip and I tend to be happy about heading home.

This year, both driving north and on my way home, I rode the outside lanes. These are concrete floorings and less scary than the metal mesh flooring of the inside lanes. However, I have to use tunnel vision and not look to my right. The railing is so low that it looks like you are riding railing-free and the Straights of Mackinac with their swirling waters are just off you right. (Every Christmas as we’re sitting around talking someone brings up a horror story about a car that was blown off the bridge and into the waters below.) The weather had dumped much snow in the area and the middle lanes with their wire mesh flooring seemed slippery and even more scary. 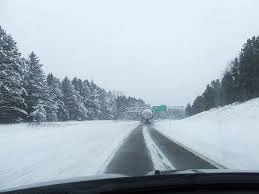 After the Mackinac you enter Michigan’s snow-belt. That the area on the other side of the Mackinac and all the way down to Grayling. The snow-belt has two distinct areas. Between touristy Mackinac City and Gaylord is the most isolated and frightening section. The road is never fully cleared; it’s common to have only one lane of the highway plowed. And even as the land around me looks postcard beautiful, the worry of breaking down in this desolate landscape is also on my mind. Gaylord is the middle of the snow-belt and the beginning of the second section. This part of the winter-land is less forbidding, because you begin to see signs of civilization – gas-stations, rest-stops, fast-food advertisements.

4. Gaylord, Grayling, West Branch and Saginaw
Even though these small towns are in the snow-belt, they are also the beginning of civilization. In Gaylord, along I-75 there are large stands of pine trees with all their lower branches cut. Grayling is insignificant except to note that it is the southern border of the snow-belt. And West Branch is the half-way point of the trip south to Rose-and-Derrick’s. The highway bridge at Saginaw is the official entrance into southern Michigan.

5. The Old Road
Much of I-75 has been repaved, except for the area south and West Branch and almost to Frankenmuth. The lanes are full of ruts and it’s a bumpy ride.

6. Frankenmuth and Birch Run
The area is a shoppers paradise. And I hate it. The only carrot is that the highway becomes 3 lanes.

7. I-475, Flint and I-69
I really hate this part of the trip. It’s side roads to avoid taking I-75 down to Oxford. They are supposed to be shortcuts, but they go through some ugly areas. The i-475 spur through Flint is surrounded by the old city of Flint. The I-69 portion is through sprawling suburbia. This time the ice-storm had covered all the trees and at least that was pretty.

8. Michigan 24 South
This is the last road before Rose-and-Derrick’s. And for three quarters of the way was lined with ice covered trees and bushes. Beautiful.