i came walking with the wind 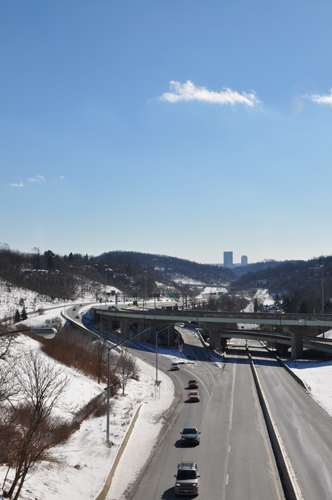 I shot the image from a bridge over old East Ohio Street. (And I decided to Photoshop all communication towers and light-poles off the horizon.) This is 279 North the modern highway into the North Hills. (The highways in this part of the commonwealth were built into valleys and entrances and exits follow the contours of the rounded Alleghenies. Therefore none have of the supra-structures that one sees in California or Southern Ontario. 279 North is the exception.) The buildings on the horizon are the towers of downtown.

I’ve been watching the new HBO series – True Detectives – and have been fascinated by the opening music. Found it online; it’s the song Far From Any Road by the Handsome Family. (Randall Roberts the Los Angeles Times Pop Music Critic calls the song a death dirge.) The title is a line from the song.

We’ve just endured the second Polar Vortex in one month and where the bright blue sky is a great backdrop for an image, in winter a clear sky always means frigid temperatures. Today, the near zero degrees were accompanied by blue skies and cold winds. (The wind on the truncated hilltops that house the big-box-superstores cuts through any insulated poly-mix that is my winter coat.)