the son you bore is risen, alleluia4th entry – easter 2014

Yesterday, I wrote the first of a set of posts that deal with generational shifts. The idea came when I opened the door to the old Mount and walked in to find the lobby looking just like it did back in the late 60’s. The school is now part of the offices of the Catholic School Board. (In Ontario, the Catholic school system is known as the Separate Schools. It receives almost total government support through an agreement between the Federal Government and a number of influential Church officials back in the 1890’s.)

In elementary school in Aprigliano, I remember watching films about undetonated land mines, but it wasn’t until I was in my 50’s that I connected the dots and realized that my parents were children of the war. And that they left their native land and the memories of war behind when they came to Canada. I’ve read about concentration camp survivors who never talked about their experiences when they got out of Europe. 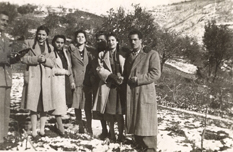 My parents never talked about the war. I was raised to believe that we left Calabria, because of economic reasons; that my dad left Calabria to find work and cash in on the benefits that came from a steady job. And yet my parents grew up in the 40’s. They were teenagers when Hitler marched through Europe; when Mussolini harangued the crowds from the stone balustrade, which overlooks Piazza Venezia. And yet not a word was uttered. Instead I saw pictures of Aprigliano, of their friends in long, elegant coats. (Mafalda is third from the left.) I remember wanting to look like them. And BTW, I have two long elegant coats of my own. 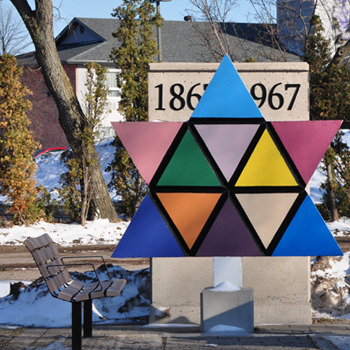 In 1968 at 17, I left Sault Ste Marie believing that I was joining an organization that would set me on a path that was consistent with the values that I had learned in my parents’ home. I was joining a group of Brothers who dedicated themselves to teaching. I was maintaining both a religious tradition and an educational imperative. However, when I got to the Novitiate in Rhode Island, I discovered a group a men on the cusp of reform. Religious traditions and educational imperatives were old fashion; I was told that I belonged to a new generation. I was told to not trust anyone over 30. And so began the shift. I had permission to walk away from what I had learned while living in my parents’ house; while living within the immigrant community in Sault Ste Marie. Like my parents who forget to tell us about the war; I could forget my Catholic upbringing; forget my immigrant roots. I could grow my hair long; wear bell-bottoms; toke a joint. The moon was in the seventh house and the sun would shine onto the post-war world; there would be no more falsehoods or derision.

The image is the Canadian centennial symbol. Back in the late 60’s they built the library that I am now doing work in as a commemoration of Canada’s 100 birthday. I remember coming down to the library when we were in high-school and pretending to do homework when in reality we were hanging out in the new building.