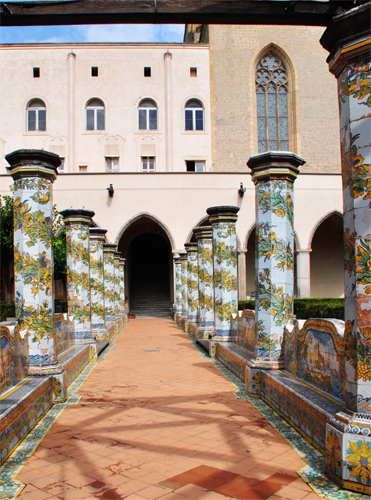 We began the day by walking the street that divides the old center – spaccanapoli. The street has a name – Via Benedetto Croce, but the Neapolitans refer to it as the street that splits Naples. It is a pedestrian thoroughfare and free of the hurlyburly of the old city.

We began at the Gesù Nuovo a Jesuit church built in the late 1500’s. The church was originally a palace and it retains the original facade of rustic ashlar diamond projections. However, with the expulsions of the Jesuits from Naples, the church moved into Franciscan hands. It is a massive structure and an active church. While we were there several people were going to confession and mass was being celebrated in one of the smaller chapels.

Our next stop, in the same square, was the Church of Santa Chiara a Gothic style church-convent built between 1310 and 1328 for the wife of Robert, King of Naples. The complex retains the citadel-like walls setting it apart from the outside world. The walls contained a vast religious community, and today contain the more modest convent of the Poor Clares and a community of the Grey Friars. It was almost entirely destroyed by WW II bombing and was restored to its original Gothic form in 1953.

The above image is of the monastic courtyard which was renovated in the 1730s, for Maria Amalia of Saxony, wife of Charles III of Bourbon, King of Naples. The majolica tile-work is characteristic of Neapolitan ceramics from that time.

There is more on the church of the Poor Clares in an epilogue post.