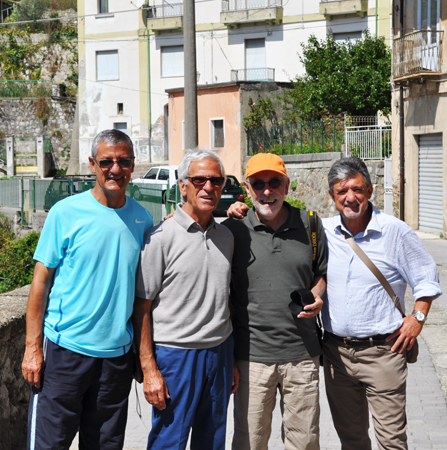 We went up to Aprigliano and we’re walking towards Santo Stefano and we see a bunch of tourists and it turns out to be Gabriele, Corrado, and Corrado’s brother Gulio. Gabriele, Corrado and I were best friends. We were the group from La Vinella – the little street in Santo Stefano before you hit the fields. It was wonderful to see them. I saw Gabriele in Toronto years ago when he first came to Canada, but it’s been 57 years since I saw Corrado. (I remember Gulio less, because he was younger than us.)

Talk about serendipity, we’re walking towards my family’s house and there they are. Gabriele is visiting with his wife and his wife’s brother and his wife. They met up with Gulio and Corrado who both live in Cosenza. They had just come back from the house that Gabriele had grown up in and we were heading in that direction. Gabriele’s grandfather house and our house were next to each other. As kids all three of us were in and out of each other’s houses.

Now I have to figure out a way of keeping in contact with Corrado.

I’ve put together a gallery of images from the time in Aprigliano.