Below Trastevere, the river meanders; it’s not banked by concrete and stone sidings; it’s shores are crowded with vegetation; and the Romans use the paths for jogging and bike-riding. 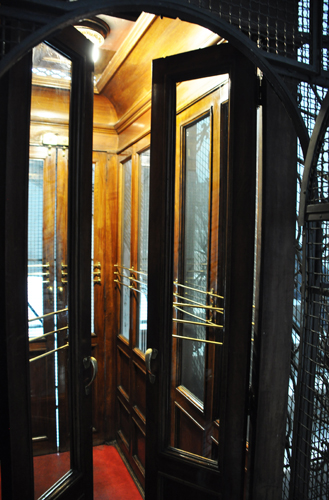 I thought I’d write about the great apartment we in. (The image on the left is one of two elevators in the building. An Otis turn-of-the-century treasure that runs perfectly well.) When I made the four reservations for the accommodations, the one I had the least information about was the apartment in Rome. The original reservation was for a wonderful three-floor apartment in the Jewish quarter, but the owner – Rodolfo – had to cancel, because they were going to repair the roof and drain-spouts in his apartment building. I asked him to recommend something and he sent me to his niece who managed an apartment in Trastevere. Transtevere is across the river from Campo di Fiori – the old Jewish Quarter. (The Trastevere/Campo di Fiori districts are the sections of Rome I know best and I wanted to be here. Also, all the other places were either too expensive, too tiny or too far from the main attractions.)

I began an email correspondence with Rodolfo’s niece and after seeing images of the apartment and realizing the price was the best I had seen, I sent her a down-payment. I still wasn’t sure what to expect and I had made up my mind that the accommodations were probably going to be fair-to-poor, but it was our last week and we had stayed in wonderful places in Modica and Belmonte. (The B&B in Naples was in the middle of everything, but like everything else in Naples it was an example of faded glory. It had been a palazzo that had been converted to apartments. The vaulted ceilings were all in tack, but the bathrooms were just added to the room. You walked in, saw the faded glory and then saw a cube that had been added to the room. Also, no renovations had been done in years. All fixtures were easily 30 years old.) To be honest, I had expected a similar set of rooms in Rome.

Well, let me tell you the apartment is nothing like the one in Naples. It is a beautiful spacious apartment. We have a dining-room, a living-room, a beautiful spacious foyer and all overlooking the Tevere and minutes from all the main attractions. OMG, it’s the kind of place I would love to live in if I had to be in Rome for any length of time. The icing is that the Internet is reliable, works fast and can be accessed in every room. (Have found that reliability nowhere else in Italy.)