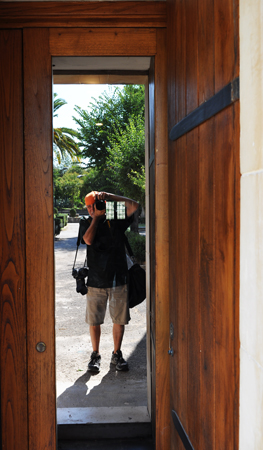 Today we hit two more UNESCO towns – Scicli and Ragusa. One more amazing than the other, but in each we interacted with various guides and one nun. (I’ll have to write more about Scicli, because it wonderful and because we learned so much about the time when the whole of Sicily was under crisis because of the 1693 earthquake.)

The Nun – We’re in Ragusa, the old town with all the palaces, the Duomo and Baroque architecture. We’re almost done and heading back to the car, when at the Church of St. Joseph, I see a sign for a Benedictine Convent museum. I go in to ask and in the small entrance is the receptionist and a little old nun. I say, Bongiourno and if they are open and the cost. The nun answers, Sei Italiano, ma si e vestito come turista. – You’re Italian, but you’re dressed like a tourist. in a condescending, I’m-your-mother tone. The receptionist tells me that it’s an offering – no fixed cost. The nun pipes up again in her I’m-your-mother tone telling me that we better not leave less than 2 euros each, because it takes money to run the museum. I ask if they will give the tour in English, because my friends don’t speak Italian, the nun turns to the receptionists and tells her that she will have to do it. (She spoke Italian with no problem, she berated the turista with the orange hat with no problem, but as soon as I told her we needed an English tour she leaves and goes back into the church to join the other nuns in praying the Rosary. (Why didn’t she do that when I walked in?)