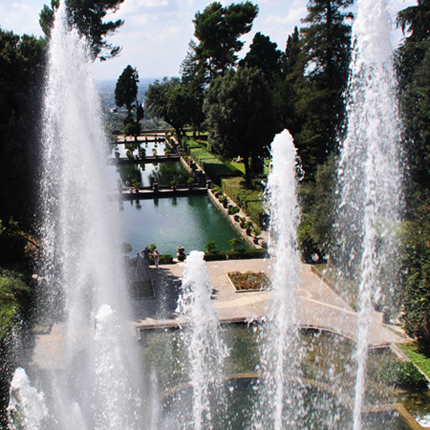 We kept the rental until today, so we could drive out to Tivoli and visit the Villa d’Este – the famous country house of Cardinal Ippolito II d’Este. The villa is best known for its terraced gardens and fountains. (The country-side east of the city was a favorite retreat for the nobility during the hot Roman summers. Castel Gandolfo, the Papal summer residence, is in this area.)

Because we had to drive through the middle of the city to get to the Autostrada, we got to see the camps for the University of Rome – Sapienza. And like the university district in Naples, it too is full of graffiti.

Once we got to Tivoli, it took us almost 45 minutes to figure out how to get to the villa. No guide-book tells you to park in the center of town and walk the five minutes down the hill. (After driving in endless circles looking for the road that would take us to the house, we pulled over and I went and asked someone for directions. That’s how we found out that the house was around the corner and we just had to park and walk.)

The garden is a set of terraces on the hillside and it’s designed like a group of stage-sets. Each set has a fountain at its center. There is a stage-set with Athena presiding over cascades and spouting fountains. There is a stage-set with a relief of Artemus Ephesus the fertility goddess and each of her breasts is a fountain spout. There are three large reflecting pools all fed by the largest fountain in the garden. The above image shows the pools and the jets of the largest and most spectacular fountain.