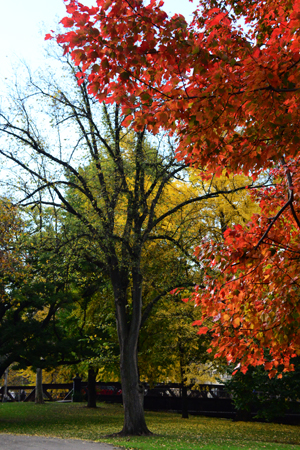 After almost 25 years I am without a dog.

Two weeks ago, the dog woke me up in the middle of the night hyper-ventilating. I took her downstairs hoping to calm her down, but after an hour and no luck, I called the emergency clinic and took her in. Once there, the vet did an examination and found that she was getting no oxygen into her lungs and after a consultation, because the vet could not get her stabilized, I made the decision to put the dog down. Gurl died of congestive heart-failure.

Gurl came to us from the same breeder that we got Bilby from. We went to Columbus to visit with the puppies (I remember the roads around Columbus being slick with slush and at that time I had no GPS and had to rely on directions printed from MapQuest.) and Gurl made her way onto my lap and insisted on getting petted. That guaranteed the sale.

Gurl was the smartest animal we’ve had and very bossy. She knew when it was time to get up, have breakfast, have dinner and go to bed for the day. Her herding instincts were well developed and she insisted and insisted.

Naming this female was a not easy, we could not come up with a name that fit, so we just kept referring to her as the girl. The name stuck. And to make it more formal rather than a default, we spelled it G U R L.