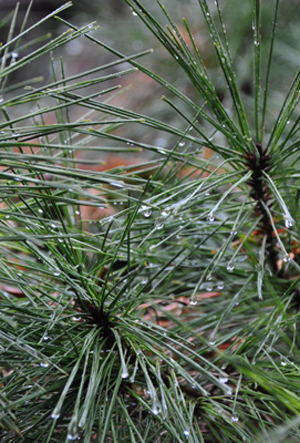 This morning was a mess. There were accidents all over the place. It started to rain around 6:00 and with the temp below 33, a slick surface covered the asphalt. Drivers in trucks and Range Rovers seemed to pay no attention to road conditions. I was out, because I needed a longer HDMI cable; took the side-roads, because there was an accident on McKnight and I wanted to avoid the two hills.

I finally broke down and got a desktop to better deal with Photoshop and other high res programming issues. The other convenience is that I can now use the laptop throughout the house. I spend a lot of time in the kitchen writing and I the laptop is great for research and for word processing first drafts. (The best would be to have WiFi access to the printer, but that will have to be the next upgrade.)

The White-pine is one of my favorite photo subjects, especially after a rain storm . The long needles hold the raindrops.

I was thinking that 66 years ago, a twenty-two year-old Mafalda had a baby. And the world at that time was vastly different than the one we all live in today. While up in the Sault, Mafalda comes downstairs one night and asks, “Ma, did you touch the electrical?” (Ma, which rhymes with fa, is short for the Italian version of my name.) I had no idea what touching the electrical could possibly mean, so I ask if something was not working. And she told me that the TV had gone off. It came back shortly, so I guess I hadn’t touched the electrical after all. The next day, I tried to explain dish-technology to my 88 year old mother. With my dad, it was trying to get him to understand that the new router wouldn’t interfere with his phone service. Both understood that something had changed, but had no references to make the connections to the new world.