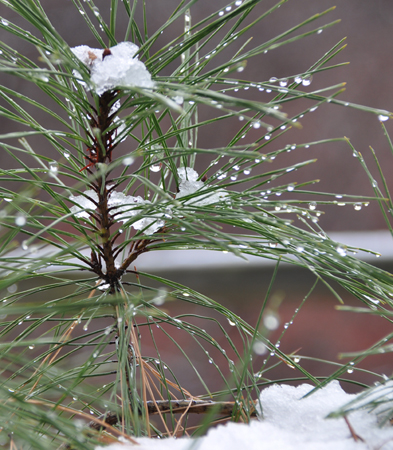 Yesterday was one of those scary-weather days. All the Barbies on cable-news were hyperventilating about the incoming storm; the mayor of New York City was out there scaring everyone into staying indoors; and the meteorologists were warning of the storm of the century. In between the prediction of impeding doom the cable stations ran segments on Sara Palin, Rick Santorum and Chris Cristie. The faux candidates were in Iowa at some super-conservative convention where global warming was derided and family values were extolled. And when those became redundant, the Barbies talked about deflated balls. Welcome to 21st century America.

I am doing research on my maternal great-grandmother – Rafaela Savaia. I found an Adriano Savaia on Facebook; he lives in Aprigliano. I sent him a note asking if his family has any connection to my great-grandmother’s family.

The snow did come and it made everything pretty. (The image on the left is the White Pine, before the snows.)