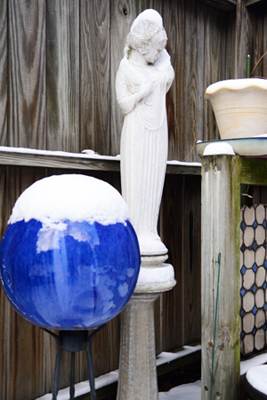 I shot the image on the left yesterday and it reminded me of Rick’s comment when we were in Belmonte. His directional references were useless in a country that was constructed and operated in a vertical dimension. (I wonder if that’s why I have no built-in sense of left and right, but I intuitively understand up and down. I grew up in a world where all directions were up or down. We went up to Aprigliano to visit my grandmother; we went up to Porto-Salvo to the chapel of La Madonna; we went down to Corte; we went down to Cosenza.)

The image is full of verticals – the tripod, the blue marble, the pedestal, the Ianelli sprite, the fence post, the blue-and-white tiles – so I had to use it. But never mind, that was warm September in Italy.

The weather is miserably cold, but the dogs don’t seem to care. There’s snow out there and they insist on going out and eating it. I already wrote Rose about Kaua’i. I am so ready to be out of the cold and March can’t come soon enough. (I should start a post-it countdown – there are 56 days until I leave for Kaua’i.) And we’re not even a month into the winter season.