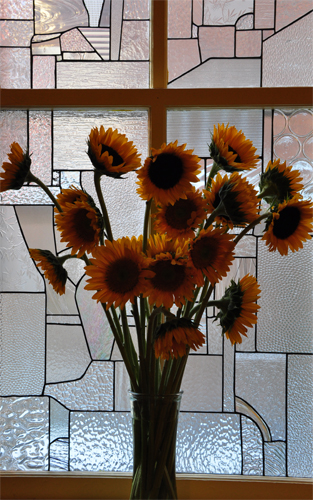 We are in midst of an Arctic air surge. Overnight the temperature went into the negative. And, it’s an absolute luxury to stay home during this miserable weather.

Yesterday, I went out for milk and oranges and the flower-shop at the grocery store had these beautiful cut sunflowers and I brought two bunches. (For me, sunflowers are girasoli and associated with Le Marche. So I am certainly not dreaming of sugarplums or of California, but of Puglia and trulli in September.) I knew I wanted to shoot them in the kitchen, but I didn’t want to do the same thing that I did with the roses, so I moved the vase in front of the windows. (The dogs were all disoriented, because the kitchen furniture was moved. Bibly chose to sit by the door the whole time. As far away from the tripod and the rearranged furniture as he could get.)

The image on the left is one of my favorites from the still-life shoot. I love the stained glass, the cruciform mullions and the hint of silhouette. Glenn Greene created the stained glass. (You know, I love the church-look. Who says I can’t pretend religion?)

The shoot has a set of images using the natural light from the stained glass window and a second set where I used a camera flash. The flash gave everything a great orangey hue. (Decided to do a second shoot with the flowers in front of the other window. In this window, Glenn added some glass pieces that had burnt-orange striations in them. And in this shoot, I took the camera off the tripod and shot free-hand. The first image in the second row was shot without a tripod.) Also, the two sunflower images in the slide-show are from the flash set. Click here to see 6 other images from the shoot.