spring comes and
we remember our innocence 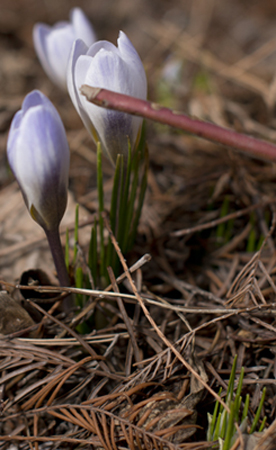 The crocus are out. (I know that’s the wrong form of the word, but I refuse to use its plural form.) I went looking for snow-drops, but they’re not there, don’t know if they’ll sprout or if the winter burned the bulbs. In 2013, I filled the bed with crocus and snow-dops; last year got some snow-drops; this year got almost double the amount of crocus.

With the backyard cleared of all snow and debris, I want to start fixing things or plant. I want someone to come in and level the whole thing, maybe replace the 6X6 or dig them and re-position them and replace the metal band along the walkway. Once I have some time, I’ll go down to the gardening place on Babcock Boulevard and see if I can get them to come look at the back-yard and give me a bid on the work I want done.

Also, some time soon, I’m going to have to make the trip to Northern Ontario. Last year I went the middle of April and found cold and snow. I promised to not visit so early ever again. (Spring is an ugly season in Northern Ontario, because you see all the debris from the winter season and the snow-melt makes sidewalks and park-land impassible.) But Easter is two weeks earlier and my schedule in early May is full. The trip will have to be the week after Easter – early April.

The only consolation to the gray and dreary days is that winter is over and even if there is snow, it’ll not linger. (March, even with a week away, is still a long miserable month.)

The title is an adapted quote from Yoko Ono.