the cold canadian1st entry – kaua’i 2015
To read this series in chronological order,
click on the category title: kaua’i – 2015. 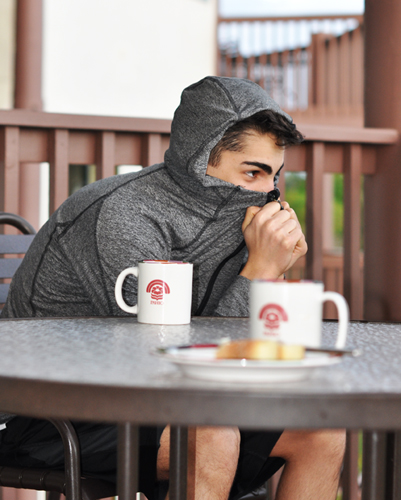 We got here yesterday, late afternoon. And this year Daniel is with us. We spent the time after we landed food shopping and getting situated in the condo. We all headed to bed by 9:00, because our bodies were still on Eastern Standard Time. (It’s a 7 hour flight from Phoenix and it wasn’t all smooth sailing. The pilot reminded us that it was winter and the flight crew was dealing with the winds and the turbulence. I also don’t know why the route isn’t considered a high-end destination. The plane was old, there were no individual screens, the seats were jammed and the service was minimal. The flight from Pittsburgh to Phoenix was on a newer and roomier aircraft.)

We woke to cold and winds. Daniel was so cold he huddled on the lanai as we ate breakfast. I had brought no long-sleeve shirts, and wore my LL Bean sweater to keep from shivering. (It is winter even here in Kaua’i.) After lunch, we drove down to Hanalei and I bought a long-sleeve T and a long-sleeve hoodie.

Spent most of the afternoon in the hot-tub, but left for half-hour to go back down to Hanalei to return one of the items, because it had a rip. Did get some sun, but that was in between cloud cover and the cold winds off the ocean.

Dinner was broiled mahi-mahi, rice and salad. (The trip marks the beginning of switching over from winter-available foods to fresh vegetables.)