but priest discarded the spell for prayer4th entry – kaua’i 2015 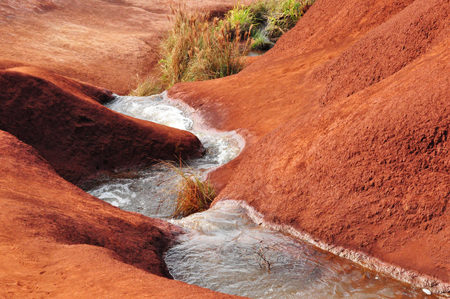 On our way up to Waimea Canyon, we stopped at the stream. The color of the earthen mounds is true.

Sunday was a full day. We left Princeville and drove south hoping to get to the canyon before the hordes. We were one of six cars in the parking lot, but on our way down, the tour buses were making their way up the mountain.

From there, we headed to our favorite taco place for lunch. As we made our way south, we had to stop at the farmers-market in Koloa and Rose and Derrick promised to just get a few things. Daniel and I laughed, because there’s no way Uncle Derrick and Zi-Zi Rose can only get a few things at a farmers-marker. It’s not in their DNA to pass up fresh food, regardless what state or country they are in. (In Fossombrone one year, we went to the market after having been there the previous day. They claimed to only need some herbs. By the time they were done, they had spent over $100.)

We spent most of the afternoon in Po’ipu on the lawn of a fancy restaurant. The beach is great for snorkeling and the lawn is best for sunning. The South attracts the move conventional tourist – white, old and over-weights. The clientele here reads from their Kindles and tables while shrouded in floppy hats, Hawaiian shirts or skin-tight tops.

After the beach, we headed back to COSTCO for coffee, taro-chips and cookies.

The title will be the last quote from the Patti Smith book.