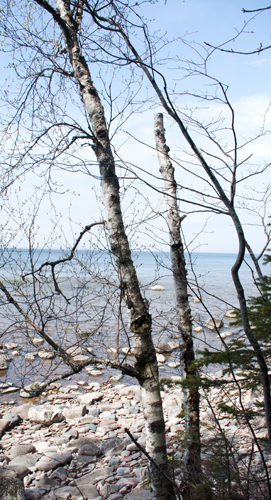 On the way back from Connie’s cottage, two men were stopped on the side of the road retrieving birch tree bark from the side-ditch. I assumed the two men were collecting the bark to use in some art project.

In elementary school, we learned that Native Canadians made canoes out of birch bark. (In Ontario, the tree is also called the Canoe Birch.) That has always fascinated me and that memory always comes back whenever I see the tree or the bark. The bark is also prized by Canadian artists who make all sorts of things from it. The bark from a dead birch rots very slowly; remaining solid long after the wood had decayed into dust.

The image on the left is from the Voyageur Trail outing. The trail follows the lake-shore, is well maintained and at this time of year mosquito-free. (I hate visiting in early August, because the mosquitoes are in full force and I leave covered in bites.) The white birch grow all along the lake and it was great finding this small stand. The Voyageur Trail is really a series of smaller trails that when linked go across Canada. This particular section, about 20 km, goes south along the Red Rock Ridge and comes out at Gros Cap. In the region most trees still have no leaves and the apple blossoms are weeks away. Spring flowers are almost two-and-a-half weeks later than they are back in Pennsylvania. For us, the spring flowers are done and the trees are full.

I liked the birch tree with its white bark enough to have Derrick cut a dozen of short logs that I put in the non-working fireplace in my Mexican War Street house. (They were hard to keep clean and eventually had to be thrown out, because they were encrusted with dust.)