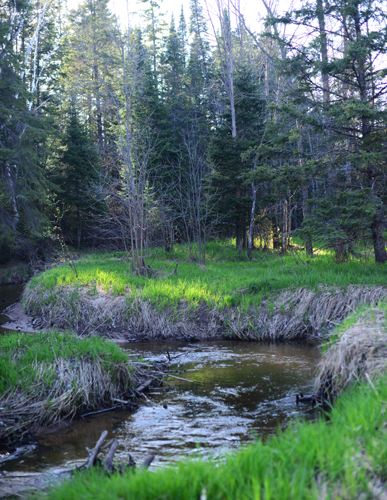 The day began gray and overcast, but at least no rain. I like the west-end of town with its industrial landscape and rugged coastline. It’s also littered with streams that empty into the St. Mary’s River.

The image on the left was taken early evening. The stream is on Connie-and-Ron’s property in the Base Line section of town. The area at one time was all farmland, now solar-farms sprout from the thawing soil. In heavily developed cities, we introduce old icons – weather-vanes, split-rail fences, Home-Depot barns – to remind us of the long ago when the streets, highways and suburbs were rural, forested lands. In Northern Ontario, the inhabitants add modern icons – John Deer tractors, satellite dishes, solar panels – to their properties to remind them that they live in the 21st century. I’ve been taught to regard the old icons as quaint and the new ones as contrary; I don’t know if I can keep to that distinction.

The stream goes through an area that was once a beaver pond. There are still reminders of the pond – felled trees with teeth marks, remnants of a dam and the top of a lodge. The main channel – the stream – when the area was flooded, was probably 10 feet deep and the surrounding area is bordered by a natural embankment that the beavers used to border the pond.