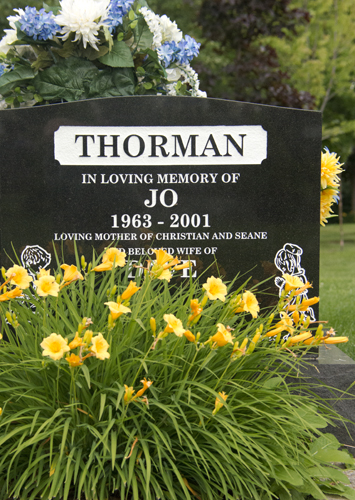 My trip to Toronto this year was awkward. I’ve avoided heading up at this time of year, but I had forgotten why. And because of my busy schedule this spring, late June was my only option to go up and visit with Frank-and-Norma, Joe, Mary-Domenic-and-the-kids, Renato-and-Gina. But it wasn’t until I crossed I-80 that I realized why it felt so awkward. Fourteen years ago – Friday, June 29, 2001, I drove up and found my sister at the end of her life. By 9:30 the next morning she was dead. Dave was helping her out of bed and she died in his arms. (The grave marker doesn’t have the Saturday, June 30th date.)

So there I was driving up on June 29 just like I did fourteen years ago. And on the 30th, I visited the cemetery. The image on the left is from that visit. (I’ll have to tell my mother that I went up. I’ll make sure to explain that the time was a coincidence and not because it was the 14th anniversary of Jo’ death. I have to make that clear otherwise, she’ll think I planned it and I hadn’t.)

Fourteen years ago we all went to Mary-and-Domenic’s and Dave lit fireworks over the suburban houses. Mafalda, being the Calabrian that she’ll always be, was incensed – his wife, her daughter, had died the day before, and he was shooting off firecrackers. Needless to say the picnic was a very subdued affair. (I had driven back to Pittsburgh on the 30th to get my Armani and driven back to Toronto the next day. Remember, I left Toronto after the coroner had signed off on the death-notice and we had gotten the funeral arrangements set up so my mind wasn’t too balanced. I-80 was how I knew I was near home.)

Fourteen years later and both of the kids were absent from the Canada Day celebration. Dave is re-married and at the celebration, at his new house, no one mentioned the life-altering event that we all went through all those years ago. Everyone at the 2015 Canada Day picnic, except for Isabel and Clay, were present 14 years ago. (Why didn’t I make reference to Jo’s death? I probably couldn’t pull it off without tears.)