via appia – the ancient road to brindisipuglia 2015 – prologue 2 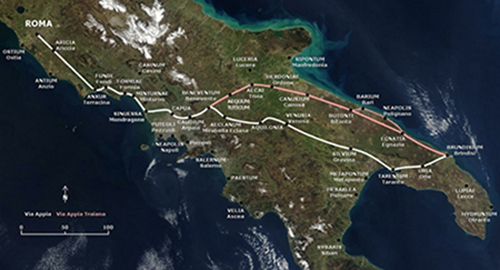 The Via Appia – Appian Way – was one of the earliest and strategically most important roads of the ancient republic. It connected Rome to Brindisi in southeast Italy. The road is named after Appius Claudius Caecus, the Roman censor who began and completed the first section. Its importance is indicated by its common name – regina longarum viarum – the queen of the long roads. The modern Via Appia Nuova – Strada Statale 7 (SS7) – follows the route of the ancient road.

I find it interesting that in Le Marche, we drove the Via Flaminia all the time. And in Rome last year, I insisted we go to the Piazza del Popolo to where the Via Flaminia began. This year, it’s the Via Appia, the most famous and most known of the ancient roads, that we will be using. (It won’t be as ubiquitous and I’ll have to find a reason to get on the SS7. Maybe when we’re on our way to Matera.)