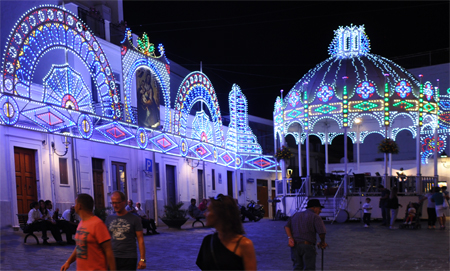 We went back to Mattinata for dinner and found the place full of people. The passeggiata was in full swing. It was a three day festival for the Madonna – patron of Mattinata. The main street was decorated with the lumieri. The image on the left is a small portion of the light-decorations. (The image was taken the second night of the festival. But Sunday night, the square was packed.)

In each town we’ve visited, it’s clear that Puglia either didn’t suffer the drainage that Calabria did or it has recovered much quicker. The whole province looks prosperous; there is little evidence of abandoned towns and villages. In the Valle d’Itria there is a resurgence of locals renovating the trulli and an effort to build a tourist industry. And here in the Gargano, as evidence in the passeggiata, there are lots of young families with kids in tow.