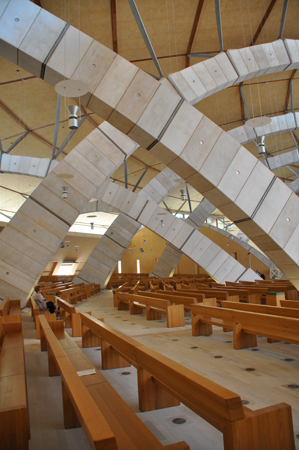 The new basilica at the Padre Pio Santuario in San Giovanni Rotondo was designed by architect Renzo Piano. The image on the left is the inside of the cathedral. We went there specifically to see the new basilica.

But like all Catholic sites in Italy this too makes it clear why Martin Luther was able to start a revolution. On Sundays and other feast-days the place is full of Italians of a certain age, dropping coins into the hundreds of offering boxes scattered throughout the church and believing that they can negotiate with the Almighty through the intersession of the local saint. (There’s even a set of holy steps next to the old cathedral that people, of a certain age, climb on their knees looking to have their requests and demands considered by the recently canonized Padre Pio.)

Padre Pio was a favorite of the Polish Pope whom I call the Nazi Pope. The Nazi Pope liked Padre Pio as much as he liked Mother Teresa. And the three of them are infamous for their nasty attitudes. The day we were there, a large Polish tour-bus dumped its people into the church. They immediately went down to the crypt and formed a line to view the coffin of San Pio all the while taking selfies – their grinning faces in the foreground, the gold encrusted coffin in the background.