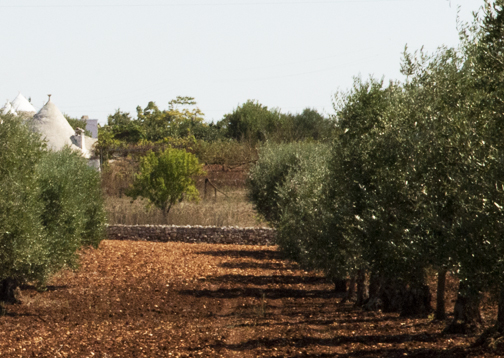 Puglia is so unlike anywhere else I’ve been in Italy. In the past, as soon as I got off the plane, the environment and landscape seemed familiar; it felt like I belonged; there was a connection. All of that was missing in Puglia. I think a lot of it had to do with the fact that the region is flat, the soil fertile and green fills the landscape. In the flats between the rise of Martina Franca and the Adriatic, there are olive trees as far as the eye can see. And what’s not olive groves are either wheat fields or vineyards. (Mussolini wanted to make Italy self-sufficient and Puglia soon became the new bread-basket.) Because the wheat was all harvested, all we saw was the red-earth. In the vineyards, the grape plants are kept very short; the grape arbors were no more than a meter tall.

And there was not a mountain to be seen, no brown, dry earth, no precipice to look over, to scare you. The vistas from Calabria’s hilltop towns, the cultivated rugged, mountainsides, the switchbacks leading to the villages don’t exist in Puglia. Even the small country churches that litter the Calabrian countryside are not there. (The small country churches of Calabria are full of amazing folk-art.)

There are no great museums or important churches with great works. The Valle d’Itria is interesting and the trulli are unique and fit into a landscape cleared of rocks. But beyond the Itria depression, Puglia is ordinary.

Immigrants from Puglia make up only 8% of Southern Italian in Canada; Calabrians make up 18%. There was less reason to leave Puglia. Several times throughout the two weeks, my cousin Rose said, “Imagine what our parents could have done if they had had fertile, flat land in Calabria?

I think Puglia, like Calabria, as a destination makes most sense if your family emigrated from there.